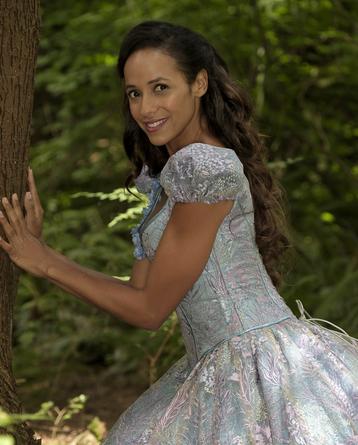 Dania is a Latin American actress born in the Dominican Republic. She grew up, living with her grandmother, in a poor household. Her parents left for the United States, when she was 6-months old, and she finally joined them in New York when she was age 10.

She knew from a young age that she wanted to act. She was discovered by a model scout and cast in a soda commercial. She attended the Actor's workshop in New York City and moved to Los Angeles to pursue her acting career.

​Dania Ramirez is currently one of the hottest young actresses in Hollywood and has costarred in several of the most successful movies and highest-rated television series during the past few years.

Ramirez can currently been seen in the popular ABC Show Once Upon a Time, were she plays the first latina Cinderella. Dania portraits the Cinderella character in different light, she is not the classic white damsel in distress, but rather a fierce sword-fighting Latina.

Before Once Upon a Time, Ramirez was part of the starting cast of the Lifetime television series DEVIOUS MAIDS, executive produced by Eva Longoria and DESPERATE HOUSEWIVES creator Marc Cherry.

Ramirez stars in the role of Rosie Falta, one of four Latina maids who work for the rich and famous in Beverly Hills.  Season 3 premiered on June 1, 2015.

Ramirez will next appear in the feature film LYCAN that she produced and starrs in due out in May 2017. Ramirez plays the role of Isabella Cruz. In the film, six college kids in a sleepy Southern town are
assigned a group project to rediscover a moment in history. One of them sets in motion a horrific fate when he proposes they head into the Georgia backwoods to tackle the legend of Emily Burt, the Talbot
County werewolf. Lycan is a Hitchcockian tale of horror set in 1986 that delves into a hundred year old true fable and is met with consequences that go beyond any classroom lessons.

She also recently wrapped the feature film Galileo, where she starrs opposite Santino Fontana and Maria Conchita Alonso. Her latest film MOJAVE, was written and directed by William Monahan and starring
Oscar Isaac, Garrett Hedlund and Mark Wahlberg in the role of Detective Beaumont. MOJAVE follows the story of a suicidal artist who goes into the desert, where he finds his doppelganger, a
homicidal drifter. The film premiered at the Tribeca Film Festival in April 2015 and was bought by A24.

Her other film credits include AMERICAN REUNION from the hugely successful AMERICAN PIE franchise, which opened as the number one comedy in the U.S. and went on to earn more than $300
million worldwide. Ramirez also costarred in the third installment of the X-MEN franchise, X-MEN:  THE LAST STAND directed by Brett Ratner, the Sony Pictures thriller QUARATINE, and the live-
action movie version of the classic animated series FAT ALBERT. She made her film debut in Spike Lee’s THE SUBWAY STORIES for HBO, which lead to two other Spike Lee projects, 25TH HOUR
and SHE HATE ME.

Ramirez was also seen on the critically acclaimed HBO drama THE SOPRANOS as Blanca, which earned her a SAG Award for Outstanding Performance by an Ensemble in a Drama Series. She regularly
appeared in NBC’s cult hit HEROES and HBO’s award-winning ENTOURAGE.

As a model, Ramirez was named the face of CoverGirl and was featured in their advertising campaign for two years running. She also appeared in the CIROC “Luck Be A Lady” campaign with Sean “P.
Diddy” Combs that was shown around the world.

For the past two years Dania has been a sponsor for Yefrey David. Yefrey is an orphan boy  suffers from cerebral palsy.  He lives at the Orfanato Niños de Cristo, located in La Romana, Dominican Republic. This orphanage Provives  more than 135 orphaned children with a home, health and education through college to help them become independentand productive members of their communities.  www.ninosdecristo.org